It's been One Year

Of course I knew this day, the anniversary of Mark's passing, would eventually come.  I wasn't sure how I would feel.  Would I be doing better?  Would I still be crying?

And the answer is yes to both. 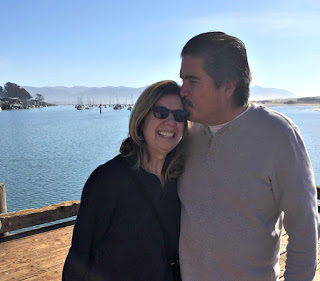 I feel like I've accomplished my goal (with God's help of course) keeping the house up, the pool - it's still looks pristine and blue, the vehicles - both the car and truck, learning the fence business with Rosanna and keeping it in the black and our crew working. So part of me is proud of myself and on the other hand, it's so hard because it doesn't mean anything without Mark.

Also - with ironic timing, my daughter and I have decided to close the fence business, and our last day of work was also on the anniversary date of his passing. 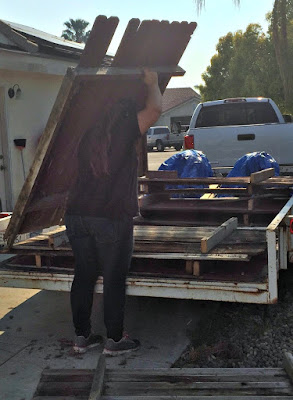 We had a great last day - I was scared. I didn't know if I was going to cry all day or what.  But as it turned out I spent the WHOLE day with Rosanna.  Her husband was doing a tile job and the kids were at their other grandma's.

Rosanna wanted to honor Mark with a job, so she hustled up 4 posts for a guy named Matt.  It was the best way to spend the day.  Out in the sunshine, laughing and joking with Rosanna and Ramon.  It was a fairly easy job.  The worms and bugs coming out of the post holes - OH MY!.  That's was so funny.  And Rosanna throwing them at my feet, and then Roman throwing them at Rosanna.  I was proud of Rosanna and amazed at her sticking her hand back in that post hole with all those roaches!  (We had to clean the post holes out of the extra dirt and old wood to fit the new post in.)

And you wondered why I want to quit the business!  hahaha! Actually that's not even on the list.

Angela wanted to honor Mark by having lunch together. We (my girls, Rex, and I) had lunch at Johnny Rockets. 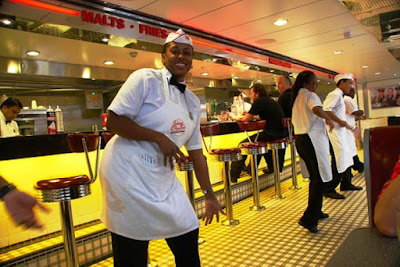 Afterwards we all went shopping at Charming Charlie's.  We bought earrings that match and Angela said we should do it again next year. 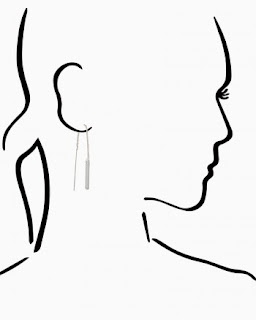 After all Mark always bought us earrings. (Rosanna being so funny would get him buy her some and then ask me to buy her some more!  She always knew how to work the system.  hahaha!)

Then Rosanna, Serena and I went back to the house and did nothing, just relaxed and had a good time talking and laughing. 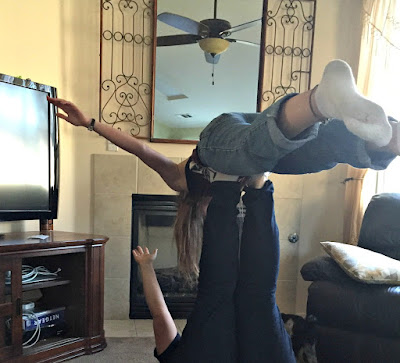 You just know we would find something silly to do! 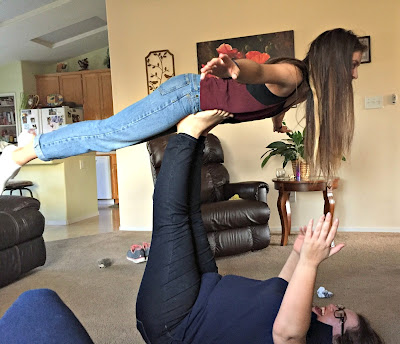 So, here's what I've been thinking.  Rosanna showed me a video about complaining, how God could not bless the people following Moses into the promise land because they were complaining (not trusting Him). So they circled around for 40 years.  I think my not be happy/grateful for my circumstances is complaining.  I'm not talking about complaining with my mouth.  I mean my heart.  I have to turn my heart into a grateful heart towards God regarding my circumstance.  Living without Mark, my life with working, doing Best Fence (or not) etc. etc.  Because this is the life that God gave me.  I need to be happy with it.  (I'm not talking about the grieving that's fine and it's okay with God to grieve.)

I still don't know where to go, or what to do with my life. The only thing is God has been telling me for a while is "trust".  That's it.  Trust him.

So I'm off to enjoy some quilting now.
Linda

I took a trip up to see my sister near San Francisco.

Lately, I've been so bad at taking pictures.  I just simply forget to. 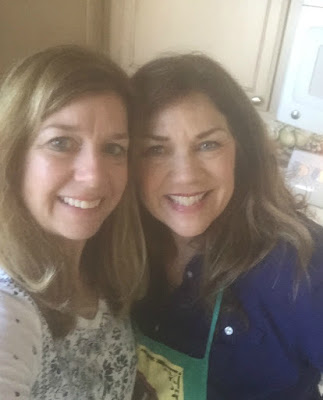 I grabbed my phone and grabbed my sister who was working in the kitchen and snapped this one.  Wow!  It turned out great!!!
That's me on the left and Cindy on the right.
We actually look like sisters.  When we were younger no one believed we were.

We had to make the trip to SF so that Serena could meet up with the WYAM group.  They had a dinner for all the missionaries and to pick up her clothes.

Wait - do you realize what I'm saying?

SAN FRANCISCO and STICK SHIFT??
Hills - and clutching on those streets?
And NOT rolling back into the car behind? 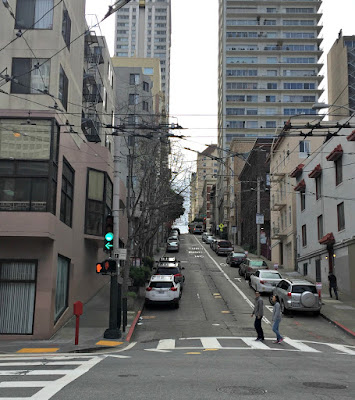 It has been about 30 years since I drove a stick.  AND I did it here on hills like this without a single problem!  Whoo Hoo!!  I was so impressed with myself.  Hahaha

I love cities and all those cool building. 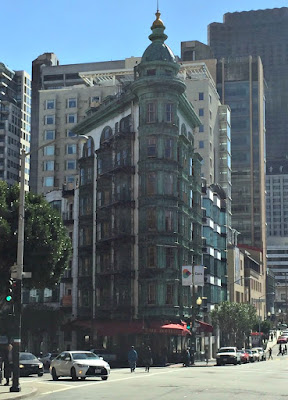 Like this one triangle one that is on a strange triangle corner.

And the bridges - which by the way I'm not afraid to drive over. 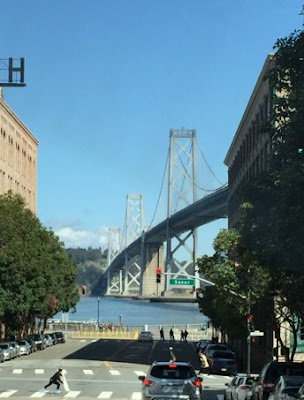 There's a lot of fun stuff to see as you are walking.
Like this heart. 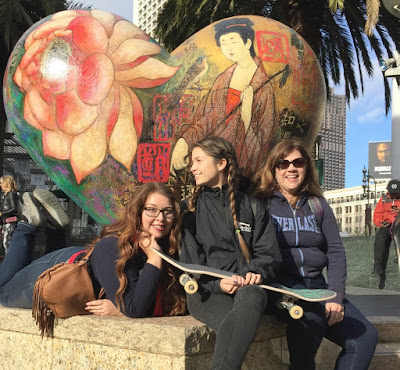 My two girls, Rosanna and Serena - and Sis Cindy.

Serena just came back from being a missionary trip in China, so Rosanna said we had to go to Chinatown in SF as not to be left out.  So off to Chinatown we went.  Oh my, the Chinese people loved Serena speaking to them in Chinese.  We had so much fun.

We went to a little Chinese Cafe and Serena ordered our food. 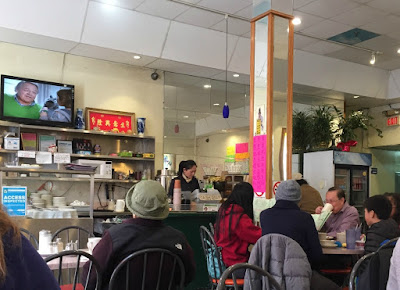 She showed us what she usually had for breakfast or lunch.  And told us all about life on the other side of the world.  The different ways they have from us - such as there are not lines. Can you imagine? People just push their way in, but they are not seen as being rude.  That they do not speak in tense - such as past tense, present tense and future. Which was very hard for Serena to communicate that she had already eaten.  Her Chinese friend kept trying to take her to eat.  lol 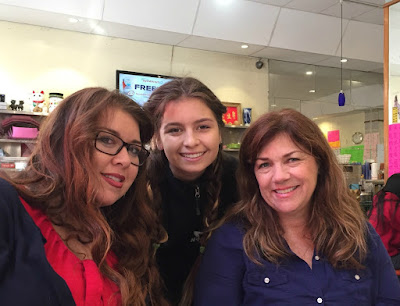 So that's a bit of my trip.

You know how it is, sometimes you just get on the internet and start looking at one thing that leads to another and then the next thing you know you have something in your shopping cart and you are checking out?

Well, that's what happened to me.  I found Patsy Thompson's video about the Clarity Ruler Foot. 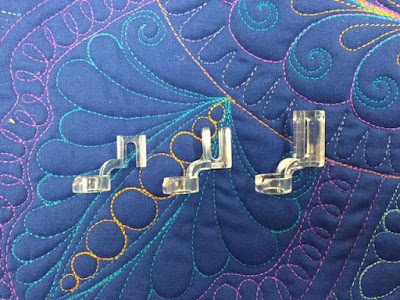 (This is Patsy's Photo and quilting)

I love this idea of having a clear foot.  So I popped one in my shopping cart.  Here's the link to her home page were you can see her video.

She is super fast at shipping, it was shipped the same day I ordered it, so I should have it here in a couple days.  I can't wait to try it!  That's one nice thing about quilting, there's always something new to learn.

I won't have time to do anything else with quilting tonight - my daughter is wants to make dinner for her boyfriend and can you believe she doesn't want me around?  So this will have to be my post for FNwF - just buying a quilting foot.