Have you seen the button on my side bar for Christa's Year of Weekly Giveaways?

I put it there because I love Christa's Quilts and because I think it's great she is having a Year of Weekly Giveaways.

Never did it occur to me that I might win.

But WIN I did and I'm so excited about it.
(Thank you Christa!)

So let me share what I won.
One of the charm packs is Full Moon Lagoon by Mo Bedell.

Don't you just love this fabric?
And another charm pack is Kitshenette by Claudine Hellmuth.  This Kitchenette fabric is is another big favorite of mine.

And check out this one.  Annalee by Jane Dixon  Rather different from what I usually get - it's going to be fun to work with.

And a charm pack of  Textured Solids.  You know these will come in handy.

I found and ordered this fabric in Christa's shop. Don't you love it?
And this handy dandy tool .
A tape measure that is 120 inches!


I have no problem using my 60" one. Now instead of adding up the two measurements (when my quilts are over 60 inches - which is all the time) I can just measure once and go.
I love tools that make life just a little bit easier.

Thanks so much Christa.

Sometimes I go to blogger to write a post and instead I'm reading posts! I see someone else's interesting post and then another one and another one.  Oh Dear! Does this happen to you too?

So I've torn myself away from a really great post by Pieceful Kwilter about her artistic doors. (These are worth checking out) to tell you what I've been doing.

I was so scared to start this face - I didn't know what order to do the eyes - what colors or which stitches - but as I started in, it became easy. 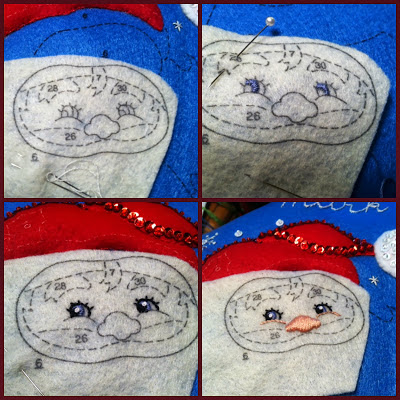 Mark is so happy that I'm working on his stocking. And I'm so pleased the face is turning out okay.

June is turning out to be a non sewing month for me.  I don't think I've even turned my machine on this month.  So different for me as I often sewing every day and for several hours. Instead I've been swimming or reading or playing games or having BBQ's with the family.  Oh yeah, and napping on the couch.  It's really hard to sew when you are napping.  LOL.

Have you noticed all the white pants lately?

About two months ago I was shopping for another pair of Capri pants.  My husband asked if I wanted to try on some white ones.  Heck No!  Doesn't he know how quickly they get dirty?  I selected a pair of dreamy blue/green pants.
But then I started noticing a white pair of pants here and and white pair there. I found myself really liking them. I noticed my sister had on white pants - and her co-worker too!  I was flipping channels and saw even Katie Couric had them on.

This was becoming too much! I just had to have some white pants.  So last Saturday I went shopping and boy are there a lot of white pants in the stores.  I tried on about 6 different styles and found the ones that fit me perfect!
I'm so happy with my white pants!
I love them!

What about you?  Are you a white pant wearer this year?


Linking up with:
Live a Colorful LIfe
Posted by Linda in Calif. at 1:13 PM 9 comments:

I really don't know what is going on, I sit down to post and then I'm called away.  Posting is becoming a bit difficult.  So let's see if I can finish today.

Well, as you know my darling little daughter graduated. 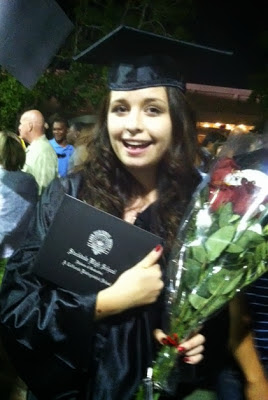 We signed her up for college.  After much thought she is going to a local college.  I'm so happy about that.  She's my baby and really such a good girl that I'm not anxious for her to leave the nest.  This way I can spoil her a bit more.


And a few days later, she was rear ended and her car was totaled.  Oh Dear!  Sorry no picture of that.  She did a lot of research and found another car.  I was quite impressed when we went to the car dealership, as I listen to her tell the salesman all about the cars. (That's a switch Eh?  And from a girl!) She knew all the specs on the car, including all the engine specs.  So after some every tough negotiating both with the salesman to come down on the price and her Dad to allow her to purchase a stick shift, here's Serena with her brand spanking new car! 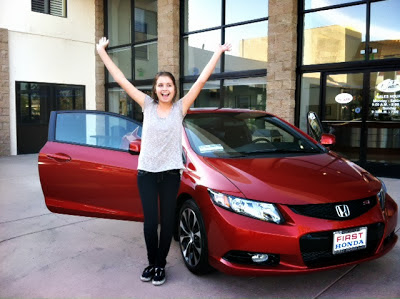 Does this girl look happy?  LOL  Well, I'm proud of her as she is buying this car herself.

I will tell you a little funny that happened while we were getting the car.  At one point in the negotiating we actually walked out and left the dealership building.  Serena convinced her dad this was the car for her and we went back in.  Then during the finance portion, as we were signing the papers, she mentioned that the horsepower is 201 - I quickly threw up my hands and said "No way!  You can's have that car! That's just too much!"  (Well, I was just teasing Serena because her "totaled" car was 200 horsepower") She knew instantly I was teasing.  But the finance guy about wet his pants!  You should have seen the look of shock and horror on his face.  (Horror of not closing the deal!)  It was so funny!  We just laughed - eventually he realized I was just teasing and tried to laugh too.

And in other news - news other than Serena.  (One would think this blog is about her! )  We took the grandkids out for ice cream.  Yep, it's official.  Mark's name is now Gampa - ice cream. 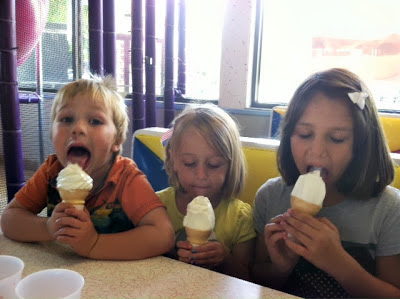 Troy is little enough that when he sees his Grandpa, that instead of saying Hi, he starts saying "Ice Cream, Gampa! Ice Cream!"   Obviously, Troy knows the important things in life.

No sewing this week.  And I'm loving it!


Now what's going on with you?
Linda

What I finished in May & June goals.

So here's what I finished up in May.

Terrier Town Block #3.  I had so much fun doing on the stitching around the applique.  I did use the sewing machine. (Psst.  It's so much faster that way!) 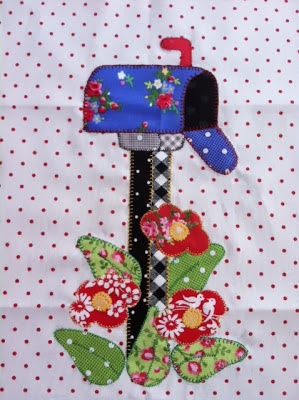 Terrier Town Block #4  Remember I didn't want to do "home sweet home"?  I decided on "Love and Blessings".  My blessings are a little crooked.  Hmm....should I change that? 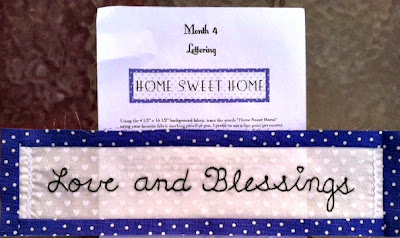 I'm going to enjoy my sewing in June.  I have several projects planned, but I'm keeping my list short. Yes, I love sewing but I also love swimming and biking and other fun summer activities. 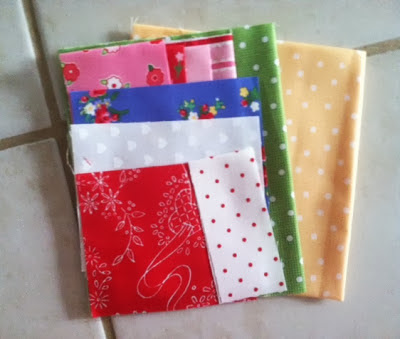 Project #3  Blouse from this Fabric. 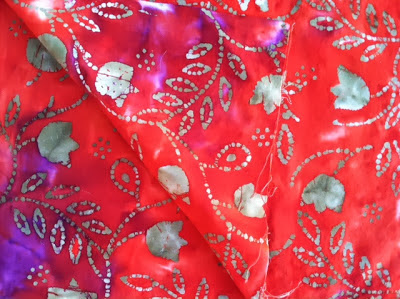 It's rather bright, isn't it?  I'm considering changing my mind to a shortie night gown.  We'll see what happens.

Project #4 - continue working on the Christmas Stocking.  I didn't do much in May - just a couple sequins last month so I didn't take a picture.  I do have ones of the girls - they have been doing so well on their stockings.

So I think that should do it.


Happy June Stitching,
Linda
Linking up with Judy's Get it Done
Posted by Linda in Calif. at 3:42 PM 5 comments: