Pink Thread & Lily with her Book

Can you stand to see one more picture of the table topper?
Good cuz that's what I've got. 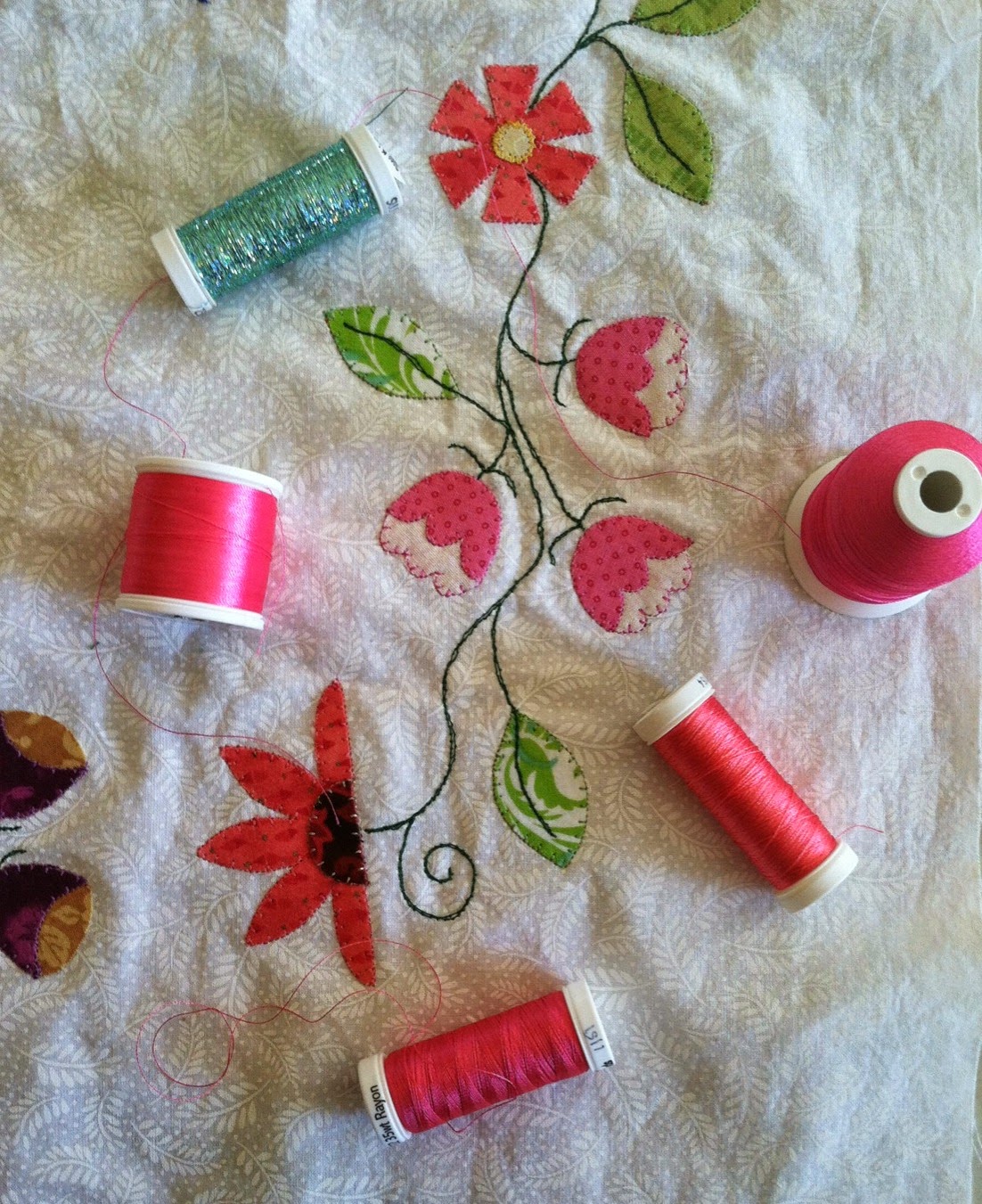 One would think it would be so easy to pick a pink thread and sew.  But not for me. I have to think and think about it.  (Why do I have so many pinks anyway?  I seldom use pink fabrics.)
I did finally decide.  And with the next set of colors I just dived in, chose a color and sewed.
And in parting, here's a pictue of Lily - 4 months old and "reading" her book. 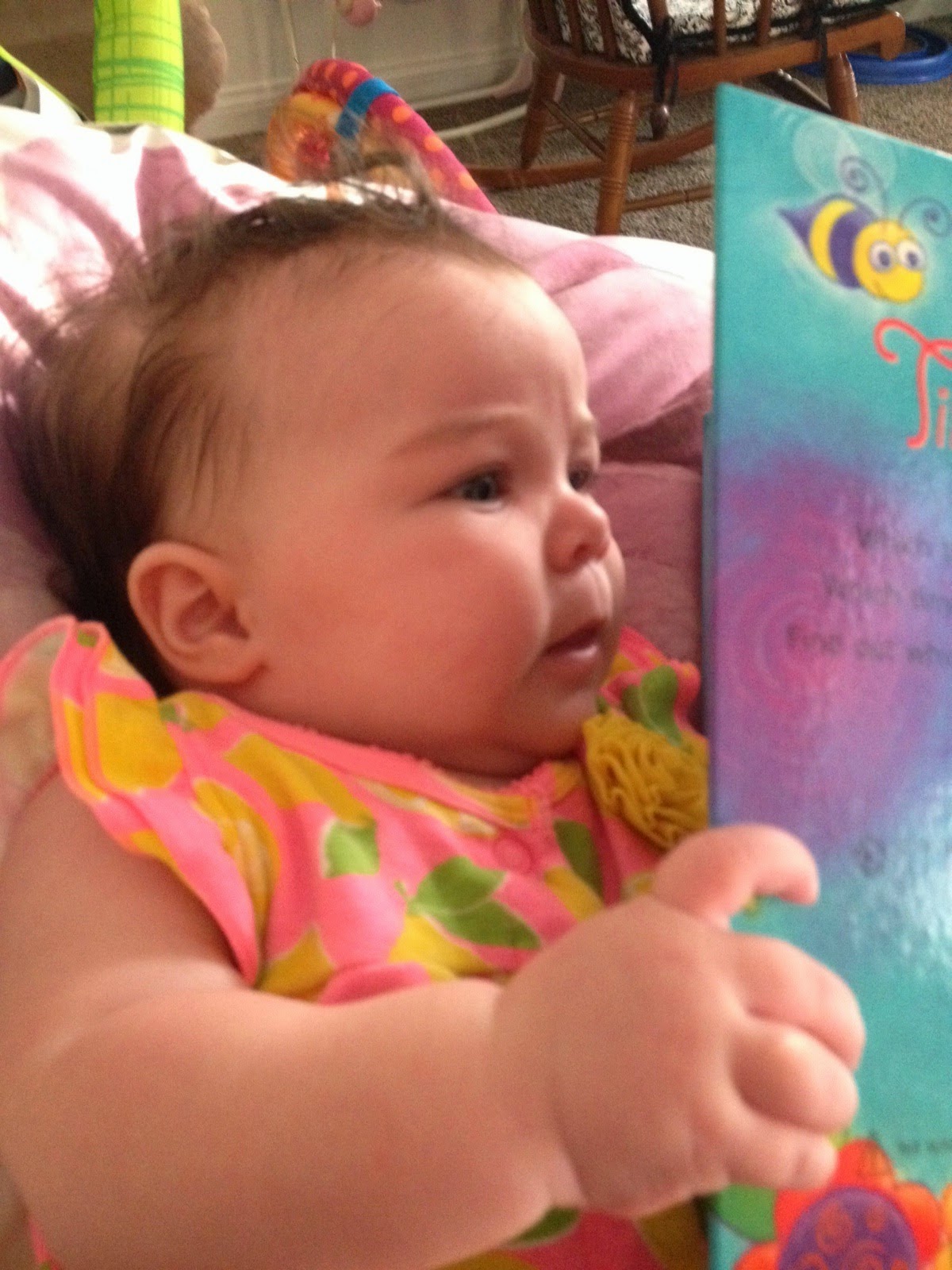 Growing Vines on my Table Topper 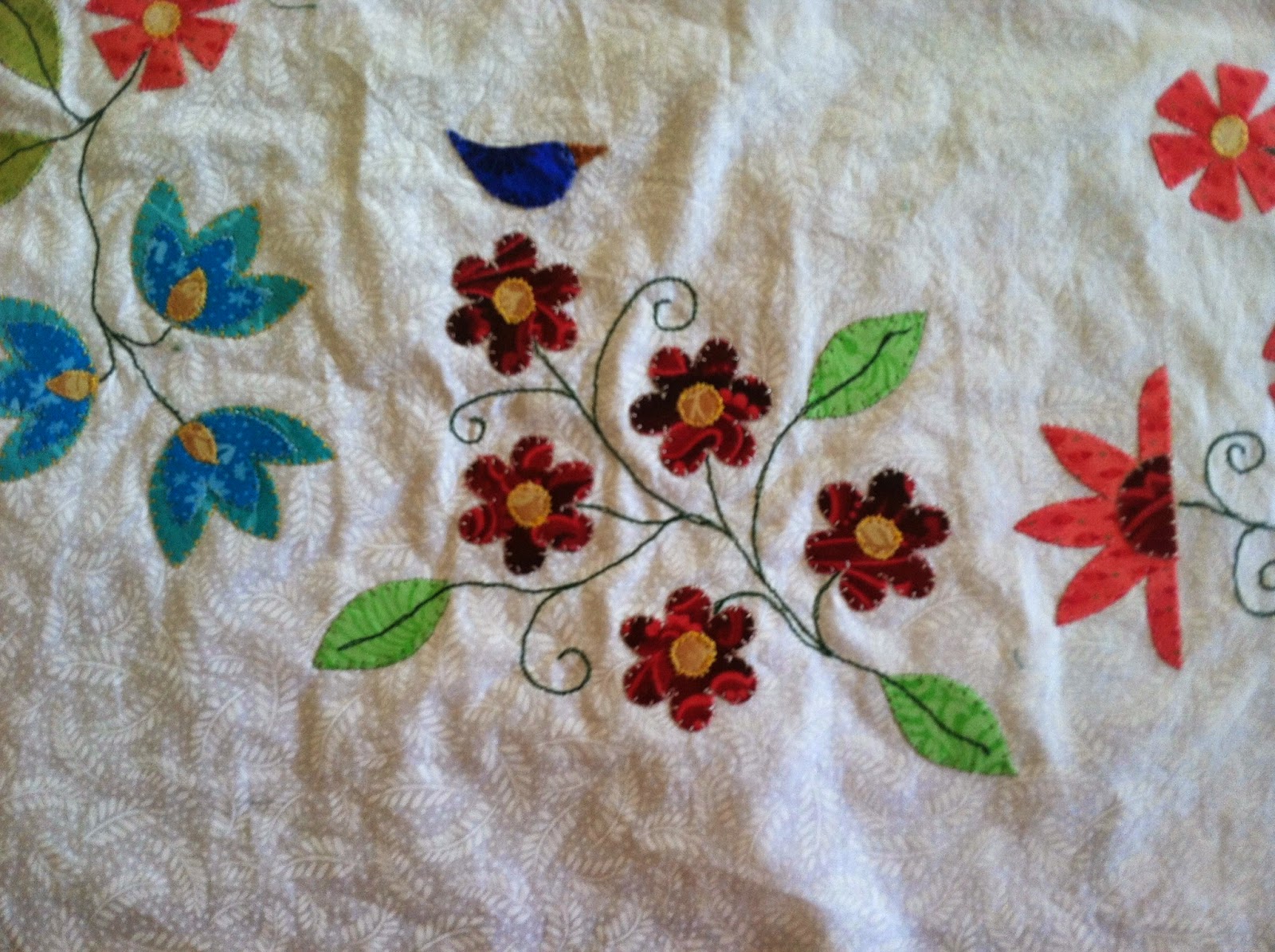 I have been enjoying working on my table topper. It was my goal to finish all the green vines over the weekend.  I almost reached my goal, but not quite.
Somehow the family got invited over for a BBQ and swim party.
As I was sitting there thinking how I didn't want to invite everyone over, my hubby was planning out the menu.  I tried to change it to my daughter #1's house - but that idea was axed by daughter #2.  As soon as I realized I was outnumber by the family - I quickly got into the spirit and was excited everyone was coming.  We had a grand time.  So glad I was out numbered. (Hey, at least I'm willing to admit I'm not Mother of the Year!  LOL!) 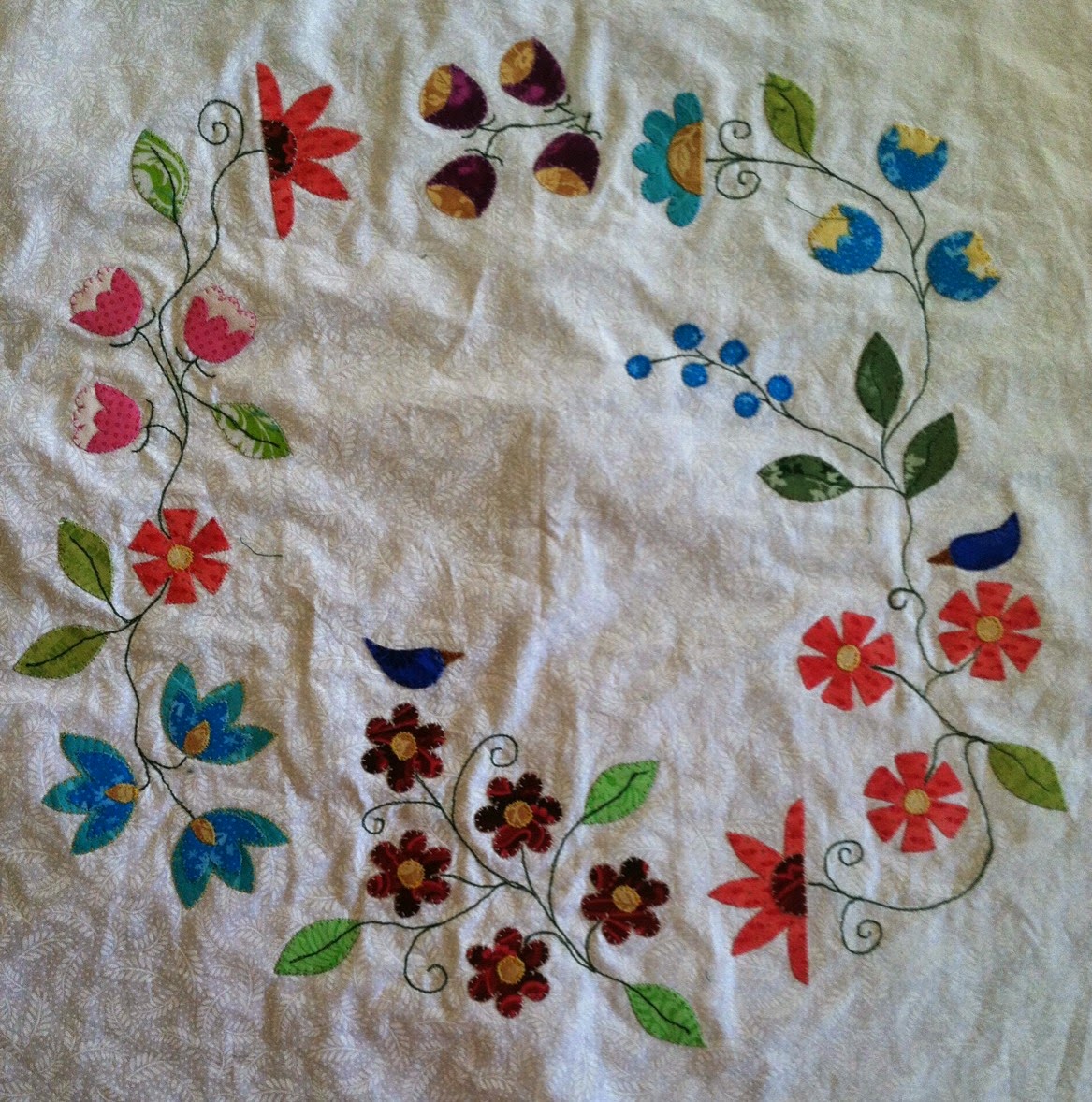 I sort of got stuck trying to figure out the green around the four purple flowers at the top.  I would stitch some green vine - and rip it out, stitch a different design rip it out.  I've thought maybe the problem is there are 4 (even number) I thought about adding another flower - another leaf...
I still have "extras" to put on the flowers.  Maybe once I have that in place the green vine around the four purple flowers will come together easier.
And on a parting note - here's a picture of Lily being her sweet self. 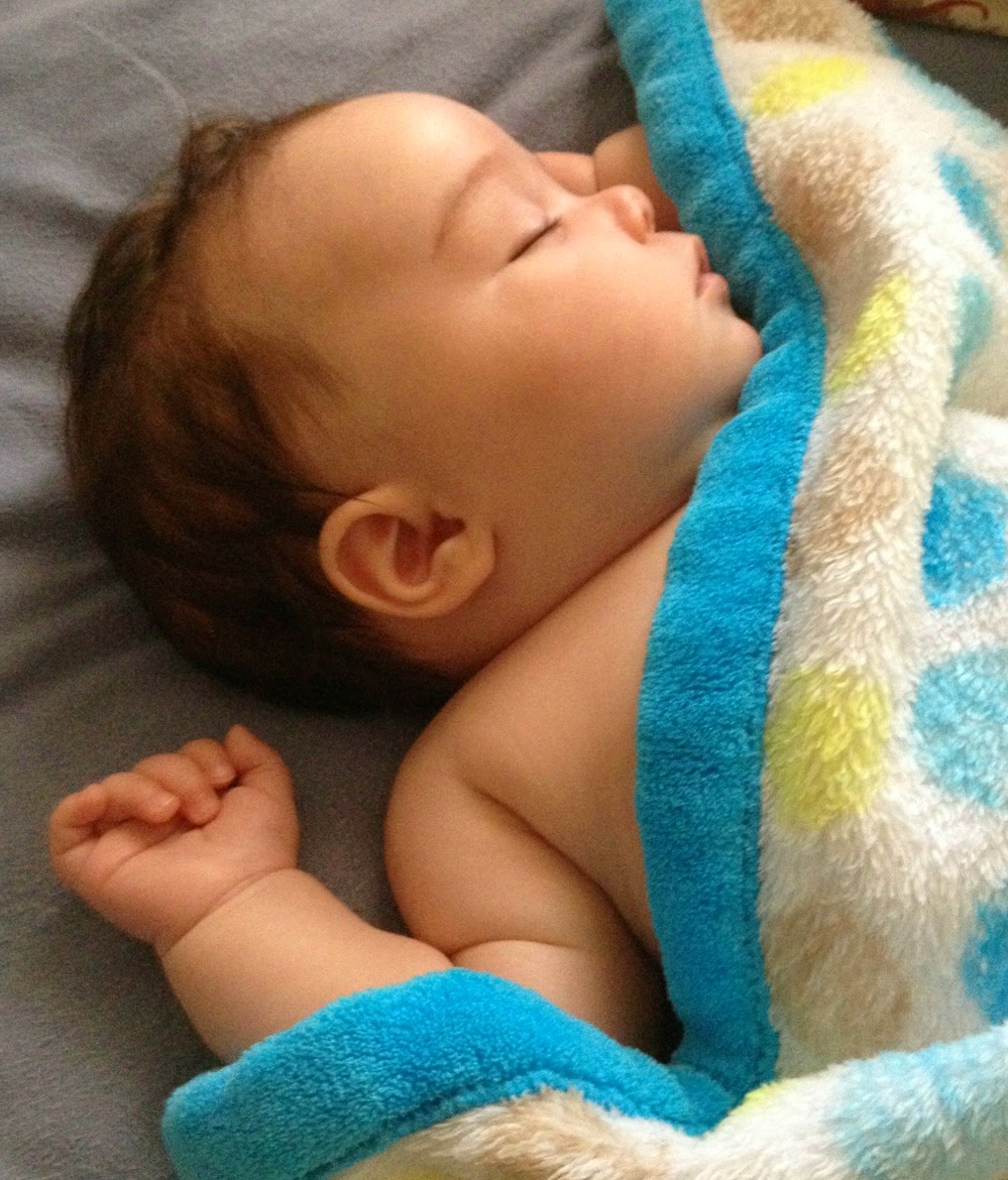 Working on those vines... and a funny. 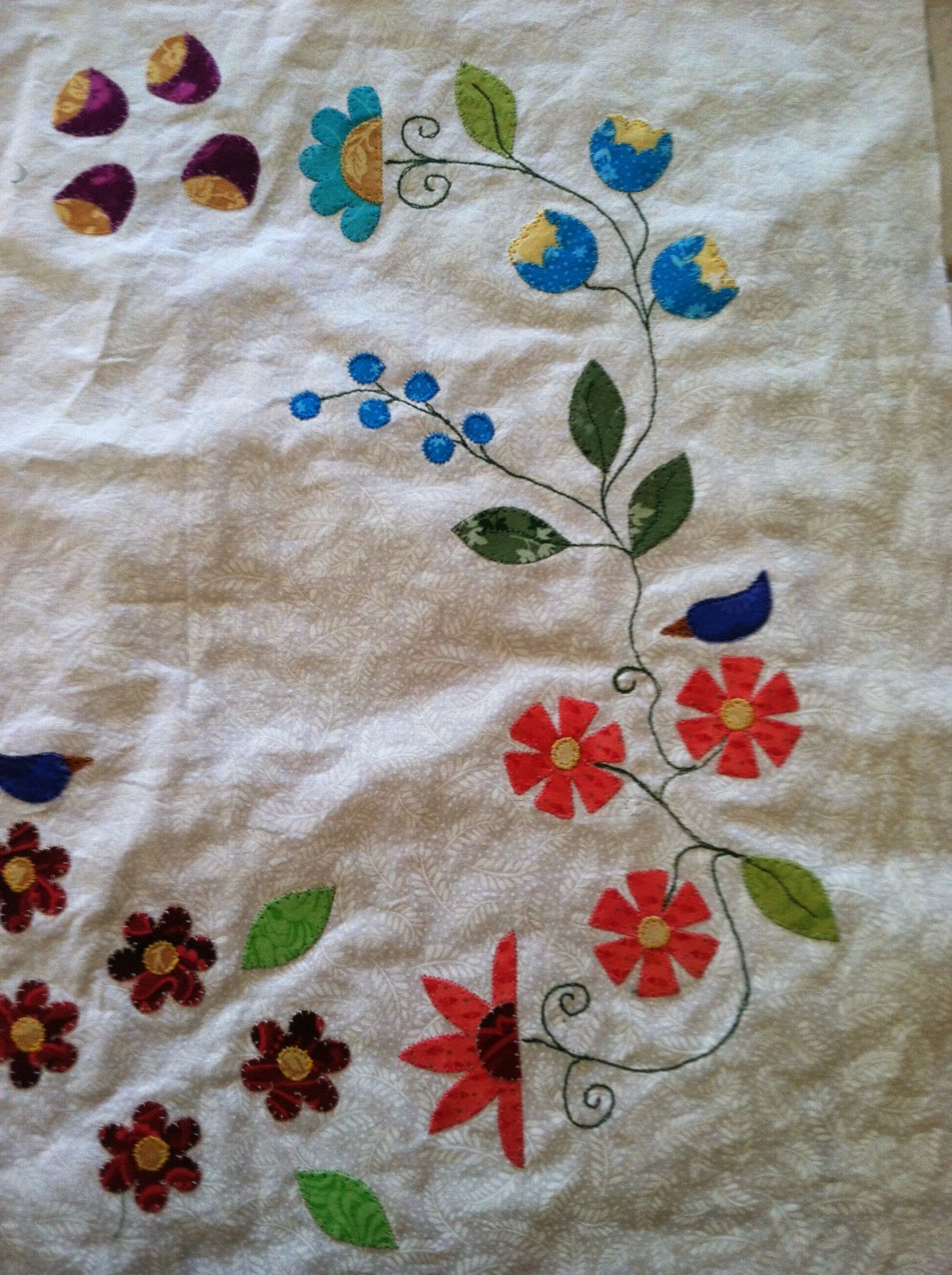 I'm stilling working on my table topper.
I have all the flower appliqued down and now I'm working on the fun part.
Those swirly green vines.
I'm going over each line twice to give it more color and a better appearance.
And Now the Funny
My daughter was at the park today and sent me this picture with the caption:
Maybe they forgot how to play. 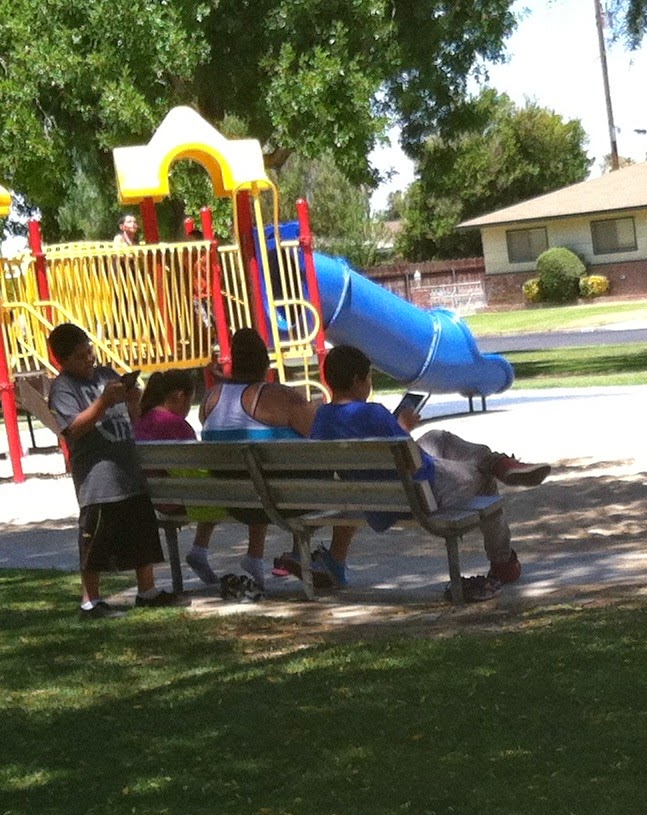 Just too cute.
Happy Stitching and enjoy your weekend,
Linda

New Project - Lovin' Me Some Applique! 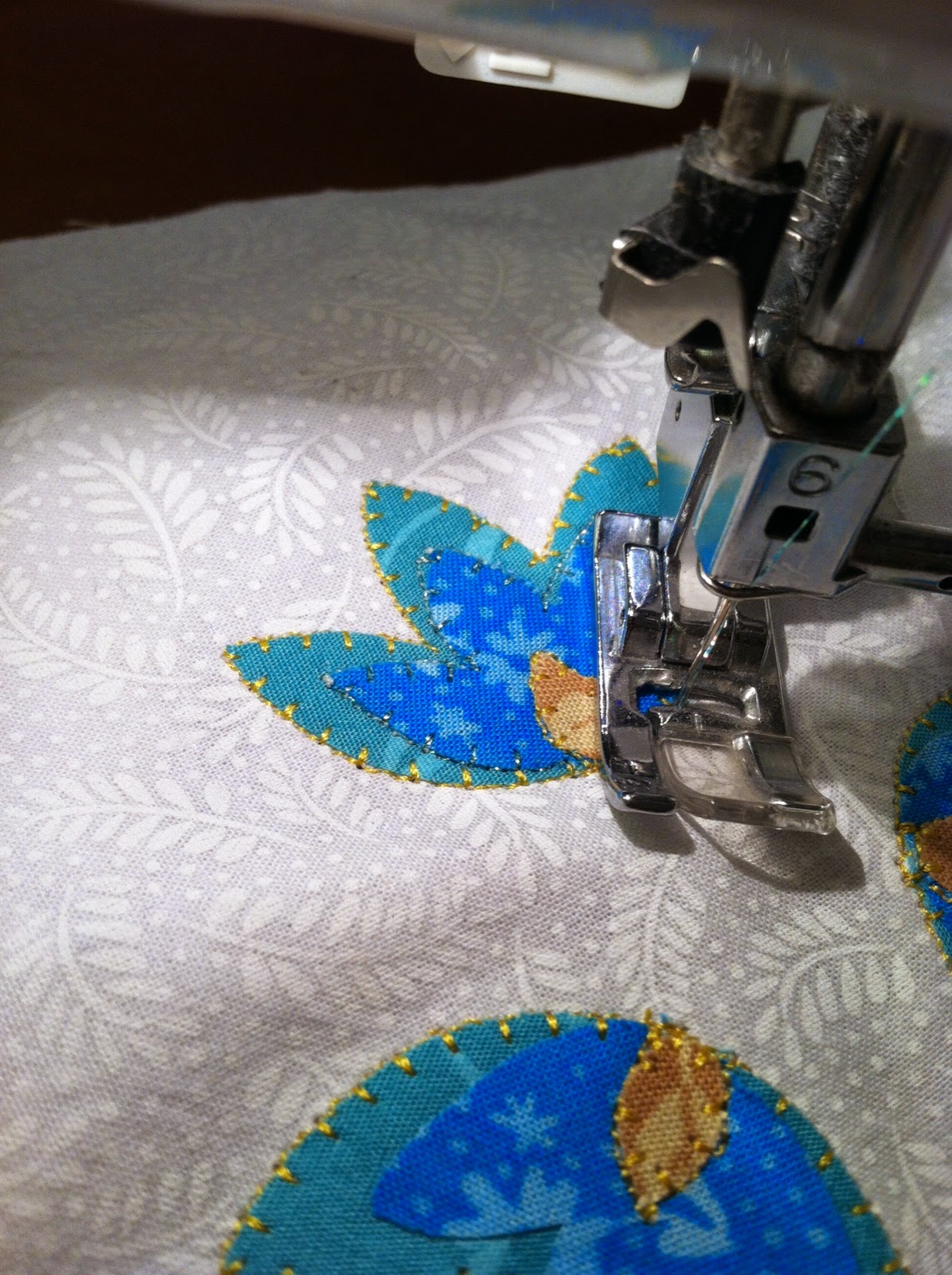 I've taken a "Big O Break" and gotten good and rested.  For a while there I felt like I was chained to my sewing machine. Playing with baby Lily cured all that. 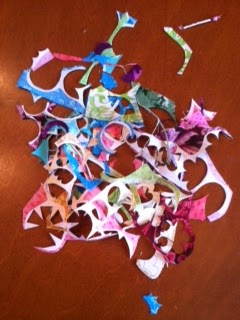 Recently the Sewful Sisters decided to do an applique project.  A table topper measuring at least 22 inches.  Well - what you know I could sure use that!  And I LOVE applique.  So I started a project and then quickly abandoned it for this one which I found in a magazine.  Why does that always happen? 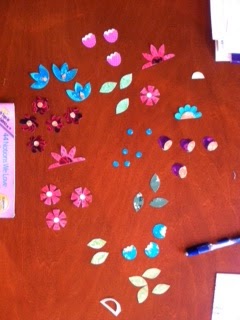 I'm having a blast with it. I've been trying some new techniques - like using a paper on the back as a  stabilizer.
And you know I'm not leaving without showing you Lily.
Happy Stitching,
Linda
﻿
Posted by Linda in Calif. at 1:21 PM 2 comments: