I was quite taken with Lori Kennedy of The Inbox Jaunt's
post about quilted scenes from a story book.
She challenged her self to quilt one each day.

Check out her post here - she is so good.

I thought that was a great idea - but since I have this wedding coming up soon, I thought I would practice with doodling with a pen and paper first.

Now I know this is not a great drawing - but I'm so surprised that at my first attempt to draw without lifting my pen (as it would be if I was stitching on my sewing machine) that the rooster looks like a rooster!  And that the body and the head are on the same page! 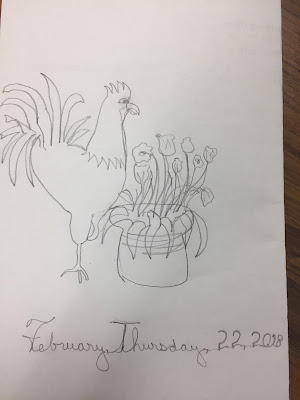 I also wanted to practice doing the date without lifting my pen, as I often quilt the date on my quilts 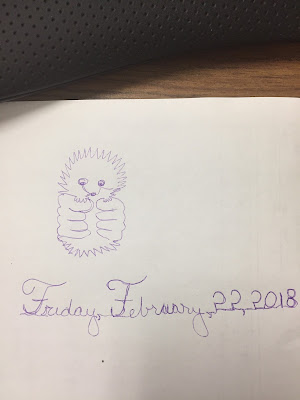 I hope to challenge myself to draw (doodle each day) until I get back from my honeymoon and I start quilting again.

Only nine more days until the wedding - and the forecast is rain.
I'm not going to worry about that just yet.

More this and that

In Marzipan news.
Apparently, she had been watching The Grinch that stole Christmas.
She ran in the house the other day looking like this. 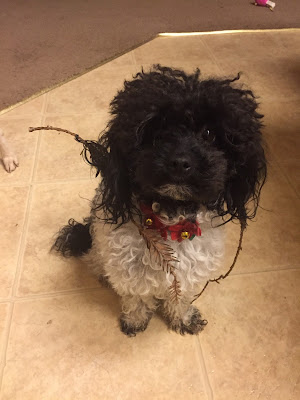 When we were in China, of course we went to the Great Wall.
It was beautiful in person.  Since it was off season & school is in session, there were not many people.  It was wonderful.  There were about sixteen of us there at the wall. 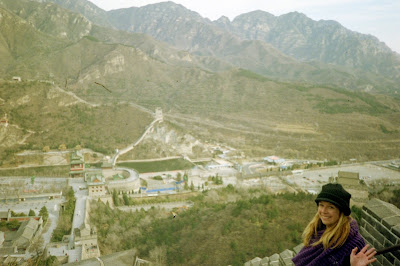 I walked (I mean climbed those stairs) all the way from the bottom where those people are teeny - tiny dots.  I was breathing hard too!  Hahaha
I did it with just my daughter Serena - and will always be super special for us. 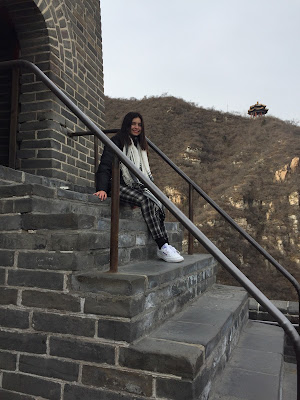 Here's Serena posing at a Look-Out. As we were climbing the steps, they were all different heights. Some steps were 8 inches and some were 24 inches tall.  So maybe three short 8 inch steps, then two 24 inch steps, then a 10 inch.  It was so steep going up. 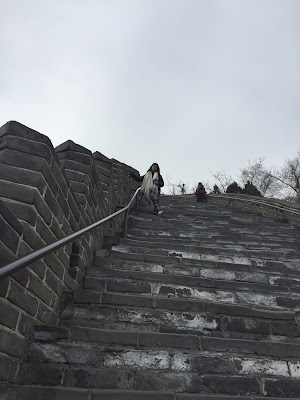 On the tour we took in China - they took us to places and then would charge American prices for things.  Like a boat trip around the lake for $65 American dollars each! It was a big boat/ship, and two-story. Well, we all know everything in China is actually cheaper. I thought it was a rip-off.  We declined.  They must have asked us 5 times!  We kept saying no.

Well, when we got to the lake we saw these little 4 man boats.  Oh my gosh so cute! And for only $6.00 for an hour! We went out in the lake with it.  Serena was driving it, Angela was rocking the boat, Rosanna and I were just laughing! 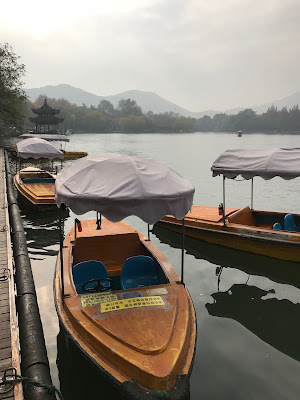 And the lake was so beautiful and peaceful. 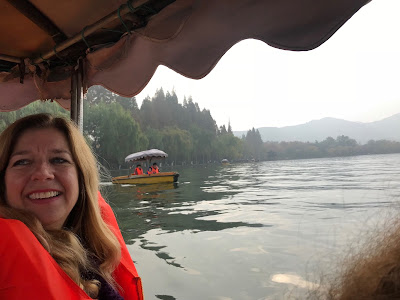 It was a blast just being the 4 of us.
When it came time to disembark - we couldn't get out!  We had to (embarrassingly and literally) roll out of the boat!  We laughed so hard and the boatman laughed most of all watching us roll onto the deck.

China had some interesting things for sale.
Like these Baby Buddha fruit.  Just so shocking.  LOL 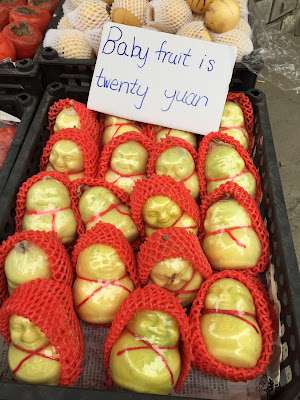 I did not try one -  just wasn't in the mood to eat someone's face.

Valentine's Day - This and That 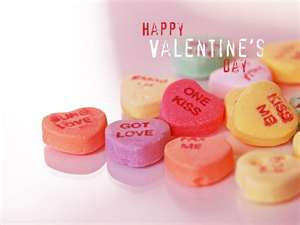 First I want to wish you all a Happy Valentine's Day.

As you know I have not been doing ANY sewing.  Nope - not one little bit.
So this post is going to be about just bits and pieces of what's been going on. 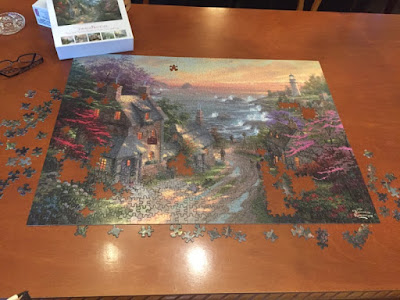 And for them - I leave the last few pieces. 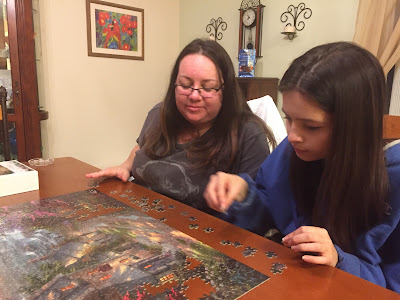 Come to find out Bruce is great at puzzles. YAY!!  Big plus there.  I told you he was a keeper. He did most of the puzzle.  I don't think he understood my method of letting someone do the easy - satisfying part so that I can get them interested. 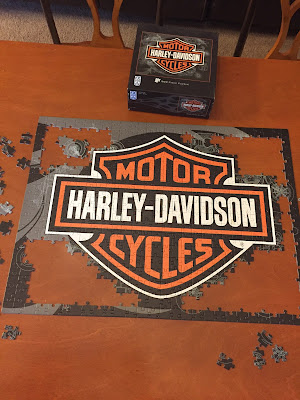 Serena and I just had to do this Harley-Davidson one. (I think we were missing Mark.) Mark had helped us before, and doing it a second time made it was much easier.

This morning I found this picture of Serena and her Dad. So Cute!

Okay - back to the present.

Everyday I do something on that wedding and let me tell you, I'm sick of it.
I do have most of it together. (Sort of)
I have my veil hanging in the bathroom to steam it out. 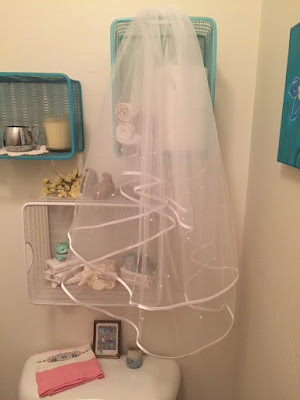 See that cute pink hand towel.  It's really a dish towel that I received from Marilyn of Mountain Top Spice during the Teacup Exchange.

The part of the wedding I do like is the flowers - that part I love.

Quite a few years ago Mark and I drove to Mexico - we bought this arbor.
Well....before Bruce asked me to marry him, he asked if Mark and I had gotten married under it.  I said no.  See, he was already thinking of asking me and planning the wedding, but I was clueless. 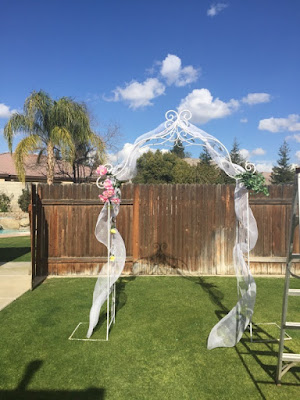 This is the arbor as I was trying different elements on it.

Bruce had wanted ivy.  Oh my gosh - I tried that and it screamed 70's CHEAP VEGAS WEDDING. I didn't think to take a picture - but it was bad.
Back to the store I went and picked up some hanging white flowers. (Do I need to tell you I have never put together flowers before?  Yeah - I thought you could tell.) 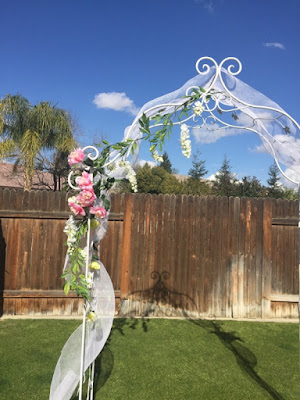 Much better.  This is just the idea of what it will be. 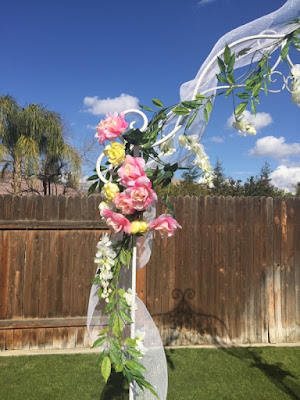 My idea was to  put it in the garage and decorate it in case of rain.
Only it didn't fit.  It was taller than the garage ceiling!! Wah, wah, waaah.
I guess I'll be doing that later. 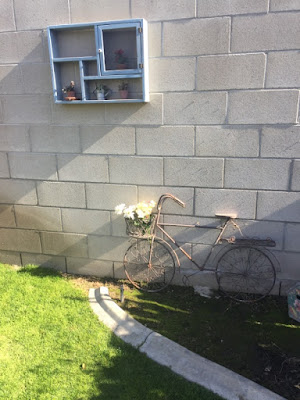 I put some of those fake flowers in the basket of the bicycle.
And once the yard is cleaned up - mulch put around, I'll add some real and fake flowers to the yard.
The picture above is going to make a great "before" picture.

I took this picture while at the zoo.  Such lovely black neck swans. (Making a heart!) 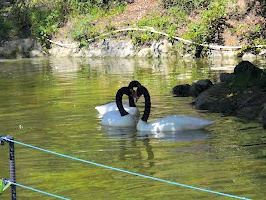 So that's it for today.